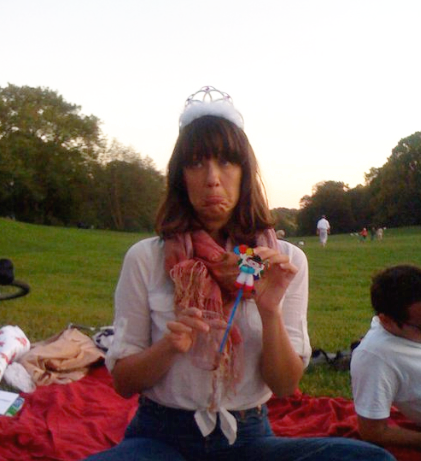 About 9 years ago, I was in what I called “psychic crisis.” I had been working my ass off to end war. NBD. And in the midst, I’d lost myself. I didn’t know what was important to me outside of, welp, trying to end war.

I had no boundaries. I was a yes person. A total people pleaser. The good Libra. The balancer. The peacekeeper (like, literally).

My psychic crisis was when I realized this approach to life didn’t work. It was somewhere during the DNC/RNC of 2008 when my co-worker (also like me) went to the hospital for exhaustion and dehydration — and I wasn’t far behind her.

So I asked the universe for help. And I got it…but the inner (to outer) work that followed created a shift in every single one of my relationship dynamics that’s still present today.

I’m grateful for it. I don’t know who or where I’d be right now without that time.

That path wasn’t easy. It’s rarely ever easy to shift a pattern. I spent all of late 2008-2009 deep in self-interrogation. I stopped saying yes to everyone. I started saying (gasp) no. I learned that no to others could be a yes for me. Wut.

I left my job at the height of the financial crisis to write and produce a play. I told my partner I wanted a spiritual partnership. I said no to some really great social justice career opportunities.

But to be honest, for the first time maybe ever since I was small child, I started to feel like me. And I was getting closer and closer to her every day.

I was still “figuring it all out” but I had dropped the habit of sending all of my energy outward to other people, other causes, other fights and I finally had enough energy left to look at what was of value…to me. Not what I thought others thought was important. Just me.

And to design my life from there.

It took commitment, discipline, support system, self-love, inner-guidance — a whole rework of my personal power system. It was a lot.

It was my Saturn Return. (Um, this is not just some woo-woo astrology chatter. It’s so very real.)

Saturn is your cosmic House Inspector, who straps on a headlamp and shines a spotlight around in your metaphorical basement.

So what’s in your basement?? Your core beliefs, honey. The beliefs that are underneath everything you think, feel and experience.

So when Saturn goes looking for mold in the basement, or cracks in the foundation, a time of true transformation takes place. It’s time for healing those core beliefs.

When I had my Saturn Return, I needed to heal the core belief “I’m not good enough.” I thought if I showed up for everyone else in just the right way (read: 1000%) then they’d see I was good enough, smart enough, enough enough.

That way of thinking led me to be a kickass organizer. Tireless. Up for anything. But eventually, the weight of it got to be too much, and I was being crushed. There was no room for even seeing myself, let alone growth!

I was either making myself too big (by taking on too much responsibility) or too small (not using my voice). A total lose-lose situation. And one that Saturn was ready to shine a light on so I could heal.

This time may feel hard or limiting…but it’s a righteous friggin’ opportunity for your ultimate growth and freedom.

So how to navigate this time where all the cracks in the foundation are showing — whether you like it or not??

Well, I’ve teamed up with my bestie, Sandy (and amazing NYC-based astrologer), and we created a helluva potent program for this cosmic rite of passage.

It’s our Saturn Return Workshop, a 45-day online training with live group support (+ 7 additional weeks of a live, guided coaching program) that offers step-by-step guidance on how to create a healthy mindset and a clear vision of what you desire, remove emotional/energetic blocks and negative self-talk keeping you from moving forward, and seriously amp up your relationship to your intuition as well as your cosmic, planetary guides so that you can become more of who you really are.
Enrollment opens only once this year (doors close on 8/4), so if you’re considering support to help you through this next phase of your growth, keep reading (and get the scoop on the bonus I’m offering)…

If you are going through your Saturn Return, or are just about to/just completed, you need a support system that serves realness, joy, and legit structure.That’s what Sandy and I are offering you.

Change is imminent and confusion is highly likely during this time, but the universe is calling on you, right now, to tune into the centered wisdom of your own inner authority and navigate from there!

The stakes are heightened. This is your rose-golden opportunity to step up to the plate and say YES to yourself. (Now you know why I feel so strongly about that.)

When you enroll before FRIDAY, 7/28 at 11:59pm PDT, Sandy and I are going to give you access to a brand new, never-offered astrology “Burning Question” bonus:

An email astrology reading with Sandy! She will study your chart and share her insight about one big question you’re working with right now.
You’ll get:

Click here to activate your guided transformation journey and automatically get this super special bonus.

And we make a point to have fun with all the heaviness transformation can sometimes feel like. So register here and find some joy and opportunity in this time of challenge. You deserve it!